In review–The Long and Silky Road 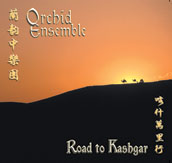 Orchid Ensemble’s 2000 recording, Heartland possesses an appropriate title since this CD oozes heart and soul with its delicate collection of traditional and contemporary Chinese music along with music from other cultures. The ensemble is led by Lan Tung on erhu (a two-string stick fiddle that is played on the lap) and she is joined by zheng virtuoso scholar Mei Han and multi-cultural percussionist Jonathan Bernard (marimba and percussion). The 12 compositions on the CD, also feature dumbek, tar, djembe, tambourine, wood blocks, temple blocks, vibraphone, glockenspiel, Chinese opera gongs & drums, tuned bells, mark tree, and other exotic percussion.

However, some listeners will be exposed to the 2,500 year old zheng with its pentatonic scale playing along side a Latin American marimba while the erhu weeps over a delicately plucked melody. And the music here would be equally at home in a meditative practice as well as, a concert hall. The compositions range from the flowing Lantern Riddles to the frantic, Lonely Crows Playing in the Winter Stream to the energetic The Gallop. Harvest Season marks a chaotic frolic and Shepherd Girlresembles a gypsy lament from Eastern Europe. The titular track acts as a meditation on a gentle wind with the zheng holding down an ornamental melody line. And Meeting in the Yurt comes from Mongolia and describes a rendezvous between two lovers in a yurt.

I get pretty excited when I hear of another Canadian world music group releasing a CD. The Canadian border is not far from Seattle and Vancouver has its own world music community worthy of attention and yet, it is British Columbia’s music scene that grabs my attention time and time again. I find that the musicians of British Columbia wield an uncompromising stance when it comes to experimenting with their varying traditions. The Canadian government’s cultural program certainly allows for these musicians to explore their diverse cultures while also experimenting with other cultures found within their community. One of the musical highlights of British Columbia is the Vancouver World Music Collective which in itself brings together Asian, African, European and other musicians together. VWMC acts as a hub for a diverse traditional music groups that make British Columbia their home.

The Chinese fusion group, Orchid Ensemble has certainly benefited from the above arrangement and this can be heard on their latest recording, Road to Kashgar. Some of the same delicate arrangements found on their CD, Heartland are also found on the new CD which are embellished by ensemble leader Lan Tung’s erhu, percussion and vocals, Mei Han (zheng, percussion) and Jonathan Bernard’s marimba and array of traditional percussion. Some of the highlights on the CD are the shimmering Buddhist folk melody Three Treasures, the Ashkenazi sacred song, Yaribon (of Persian Jews traveling the Silk Road), which also features the vocal talents of D’Arcy Zi Han and Jing Jing Zhang and Maqam:Prelude to Dance with its fusion of Chinese strings and Persian percussion. Lan Tung embellishesHujia with her vocal talents and Persian vocalist, Amir Haghighi comes on board on the closing song,Bengalila.

I find both of Orchid Ensemble’s recordings to be of exceptional quality. The compositions are innovative and a rich delight for all of the senses. The trio of musicians bring vast experience and wisdom to their performance often weaving the Chinese zither and Chinese violin with percussion from varying traditions. The compositions here might be called a musical oriental carpet that tells stories found along the famed Silk Road. Reflecting on Chinese, Persian, Jewish, Buddhist and other traditions, this is a magic carpet ride you would be willing to take. Allow this group to leave you intoxicated.